When I was a little girl, I had an imaginary friend… 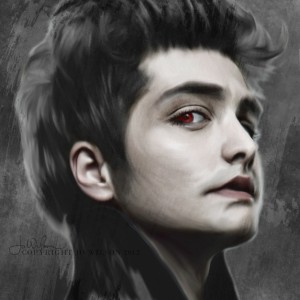 No, this is not an episode of Doctor Who during the Amy Pond years. Jo really did have an imaginary friend as a little girl, and still does to this day — and I would know because I am he.

My name is Aurthose. Although I am not the only imaginary friend which Jo has created once upon a dream, I am, quite frankly, the only one of consequence.  No doubt thanks to my brilliant English accent.

As you can see in the image above — a likeness of myself painted by none other than my beloved D’Auri — I’m a very handsome fellow. Although certain aspects of my features change over time as D’Auri has reimagined me, my eyes are always brilliant red, and my hair is usually jet black.

On a side note, in case you were wondering, “D’Auri” is my personal term of endearment for Jo. It would be extremely inappropriate for any of you to call her that. It is short for d’auridesion, which means “my infinite creation” — albeit, this word exists as part of a made-up language. Auridesion is a term which invokes many meanings; it can literally mean “infinity” or “infinite creation,” but it can also be interpreted to reference the universe, as in “all of creation.” As I am an imaginary friend, and do not exist outside of Jo’s head, she and her imagination are my universe.

I suppose I should delve into describing my origins. That’s generally what characters do when they narrate for themselves, especially during introductions…

On some level, I have always existed with Jo. I was the part of her that soothed her uneasy mind when she was scared, and played make-believe with her when there was no one else to play with. I was nameless — in that I had many names, a different name depending on the game — until Jo was twelve years old. That was when she decided to personify me into what I have been ever since.

I am part of Jo; a construct in her mind which offers balance, which inspires and fulfills, that loves and protects without judgement. I am a shield in her subconscious mind, I am the order in the chaos of her emotions, and I am the loyal companion of a lonely inner child who never wanted to grow up and stop playing make-believe.

While you might think it’s crazy that an adult woman of twenty-seven years still has an imaginary friend, I’d say you’re probably just jealous that you don’t have the courage to keep make-believe alive in your heart, even when you know it’s just pretend.